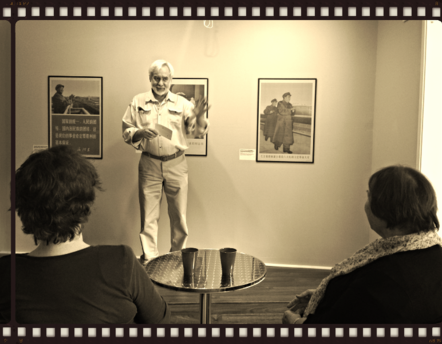 Stay tuned... Movie nights will be back!

9.0
Director: Eugene Corr, Roberto ChileWriter: Eugene CorrSummary: A life rampant, street level story of mentorship and everyday heroism in tough circumstances. An inner city coach's son, estranged in his youth from his father, spends five years on ball fields in inner city Oakland and Havana, following the lives of two extraordinary youth baseball coaches, Roscoe in Oakland and Nicolas in Havana. The coaches meet on videotape and two years of red tape later, Coach Roscoe and nine Oakland players travel to Havana to play Coach Nicolas' team. For one week, the players and coaches eat, dance, swim, argue and play baseball together. But when the parent of an Oakland player is murdered back home, it brings back the inescapable reality and challenges of life in an American inner city. Written by Anonymous

Director: Brian PercivalWriter: Markus Zusak, Michael PetroniStars: Sophie Nélisse, Geoffrey Rush, Emily WatsonSummary: In 1938, the young girl Liesel Meminger is traveling by train with her mother and her younger brother when he dies. Her mother buries the boy in a cemetery by the tracks and Liesel picks up a book, "The Gravediggers Handbook", which was left on the grave of her brother and brings it with her. Liesel is delivered to a foster family in a small town and later she learns that her mother left her because she is a communist. Her stepmother, Rosa Hubermann, is a rude but caring woman and her stepfather, Hans Hubermann, is a simple kind-hearted man. Liesel befriends her next door neighbor, the boy Rudy Steiner, and they go together to the school. When Hans discovers that Liesel cannot read, he teaches her using her book and Liesel becomes an obsessed reader. During a Nazi speech where the locals are forced to burn books in a bonfire, Liesel recovers one book for her and the Mayor's wife Ilsa Hermann witnesses her action. Meanwhile Hans hides the Jewish Max Vandenburg, who is the son of a ... Written by Claudio Carvalho, Rio de Janeiro, Brazil

Director: Roberto BenigniWriter: Vincenzo Cerami, Roberto BenigniStars: Roberto Benigni, Nicoletta Braschi, Giorgio CantariniSummary: In 1930s Italy, a carefree Jewish book keeper named Guido starts a fairy tale life by courting and marrying a lovely woman from a nearby city. Guido and his wife have a son and live happily together until the occupation of Italy by German forces. In an attempt to hold his family together and help his son survive the horrors of a Jewish Concentration Camp, Guido imagines that the Holocaust is a game and that the grand prize for winning is a tank. Written by Anthony Hughes <husnock31@hotmail.com>

Der Stűrmer and the Propaganda Cartoons of the Third Reich

Lt. Robert Bru hand-collected these historical artifacts while a prisoner of war in a German Stalag prison camp. This Friday, February 28, Lt. Bru would have turned 100! He passed away on Thursday, October 17, 2019, at the age of 99, 6 days before we opened the exhibition.

We will celebrate and honor Lt. Bru’s memory this Saturday, February 29, and invite all of you to visit the Museum to see Lt. Bru’s exhibit. His family will also be there around 11 am.

Following World War II and the defeat of Nazi Germany, most of the fascist anti-Semitic, anti-American and other National Socialist propaganda was destroyed by the Allies and by the dispirited German citizens. What remained was put in the Museums and in the underground archives – or locked away in vaults for good. The few private collections are mostly in the hands of the former Allied soldiers. These historical articles are disappearing fast, and often in trash, following the passing of their owners.

MIP has been extremely lucky to receive one such collection from a 99-year old American flyer, Robert Bru, who was shot down over Denmark. While in the German war prison, Mr. Bru started collecting propaganda cartoons from a German tabloid, Der Stűrmer (The Fighter), provided to the captured airmen by the Stalag prison administration. After he was liberated, he took the cartoons home to the East Bay and pasted them in a scrap book. In March 2019, after reading about the Museum of International Propaganda in the SF Chronicle, Mr. Bru donated his Nazi cartoons to the Museum for safekeeping. The collection was so fascinating that we decided to share them with the public in an exhibition.

The Nuremberg tabloid, Der Stűrmer (The Fighter), was the Third Reich’s premier mass appeal purveyor of a low-brow, cut-to-the-bone, “Jews Are Our Misery” message throughout Germany. Targeting the lowest disaffected classes, its propaganda power was enormous. Hitler, Himmler and Goebbels liked the paper and supported it until the end. The crass political cartoons presented in the exhibition were Der Stűrmer’s chief draw. They were cunningly crafted by the propagandists to excuse and justify Nazis’ pathological hatred of the Jews and, later, the Allies. Once vilified and dehumanized, the “Untermenschen” (subhumans) could be imprisoned, beaten or slaughtered, without any pangs of national or personal guilt.

The Museum of International Propaganda’s Exhibition hopes to make the viewers think about the effects of propaganda on society at large, and the vital role the propagandists play to support various governments’ political objectives.

We are always looking for guest speakers, artists, musicians and people who are involved in politics, propaganda, or other related topics. If you are interested in contributing to our Wednesday night events, please contact us.